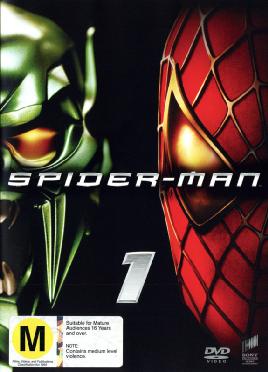 Notes: Based on the Marvel comic book by Stan Lee and Steve Ditko.
Originally produced as a motion picture in 2002.
English captions (descriptive subtitles for the hearing impaired); English audio descriptions (descriptive narration).

it was pretty good, i did not like that the webs were organic(gross) and i also didn't like that they showed the claws/hairs that make him stick (i could just through up). but other than that it was overall good

Great movie about the greatest every man hero. On a technical note I liked how his webbing was organic as opposed to the mechanical shooters.

I very much enjoyed this movie and I felt that (while I haven't watched Andrew Garfield's Spider-Man yet) Tobey portrays a somewhat more mature version of Peter, comparable to Tom Holland, who sort of shows a less mature version (and I'm not saying that's bad). I feel like Tobey and Tom were very good Peters and Spider-Men and I don't appreciate the competition between them. I like them both equally and I think they are very awesome.

At the time I thought this was a great superhero movie. Probably one of the best. It's aged a bit, but I thought it was pretty faithful to the source material.

It was awesome. Easy to get laughs out of this movie.

This movie came out in the 2000’s but to this day it has been and will always be one of the best super hero movies of all time. This movie starts off showing Peter Parker before he becomes Spiderman. It shows how Peter was a nerd that didn’t have many friends and got bullied a lot. It also showed how he lived with his aunt and uncle. But suddenly when he got bit by a radio active spider, everything in his life changed. His uncle noticed he was changing and had a talk with him. In my opinion what his uncle told him “with great power, comes great responsibility” was not only the morale of the story but also the most important part which made Peter into the Spider Man. Shortly after he uncle was robbed and killed which is what turned Peter into a crime fighter. The main villain in this movie is the Green Goblin, and it was a perfect way to test Spider Man with his new powers. Although it seemed impossible in the end Peter stopped the Goblin and found out it was his best friend (Harry)’s dad. Harry also realized Peter was Spiderman and this drifted their relationship because Spider Man killed his father. This movie will always be a classic and is what inspired most movies in the super hero saga. Although this Spiderman is older than the current super hero movies out, I recommend everyone to check this amazing movie out. @ButterChicken of the Teen Review Board at the Hamilton Public Library

Spider-man is a phenomenal American film starring a high school student in New York who goes from being a victim of bullying and not enjoying his life to developing super powers, fighting off crime, and becoming the citiy's protector. I personally love this movie because it features a high school student and since I am close to his age, I can relate to some parts of the movie. The movie's plot, action and fantasy caught my eye and kept me amused throughout the entire 121 minutes. I also liked it because even though a lot of people doubted him, he ended up proving them wrong and accomplishing his dreams. I recommend anyone from the age of 13 and older to watch this movie. It does not contain much explicit words and you will most likely enjoy it if you are into action/fantasy. If I had to rate this movie I would give it a 9/10.
- @smous786 of the Teen Review Board of the Hamilton Public Library

This is the best Marvel movie I have watched. I enjoyed it.

A very good, if somewhat corny movie, and Willem Defoe is fantastic, but the Goblin Armor is hard to take seriously.

This is a 2002 American superhero action-drama directed by Sam Raimi, based on the Marvel Comics character of the same name.
A high school kid in New York City turns into a crimefighting superhero after developing spider-like super powers with an uncanny spider bite.
With fascinating visual effects, it is an enjoyable entertaining piece.

Green Goblin: "Are you in or are you out?"

It's your friendly neighborhood spiderman!

Peter Parker; Sorry I'm late everyone! It's a jungle out there! I had to beat an old lady with a stick to get these cranberries!

Norman Osborn: [at Peter's graduation] I know this has been a difficult time for you, but I want you to try to enjoy this day. Commencement: the end of one thing, the start of something new.

Peter Parker: I said... uh... Spider-Man, I said uh... The great thing about MJ is... when you look in her eyes and she's looking back in yours... everything... feels... not quite normal. Because you feel stronger and weaker at the same time. You feel excited and at the same time, terrified. The truth is... you don't know what you feel except you know what kind of man you want to be. It's as if you've reached the unreachable and you weren't ready for it."

Sadiemlady thinks this title is suitable for 14 years and over

ReneeMG06 thinks this title is suitable for 9 years and over

blue_dog_13463 thinks this title is suitable for 10 years and over

T35_BanE thinks this title is suitable for All Ages

NovelQueen thinks this title is suitable for 11 years and over

High school senior Peter Parker (Tobey Maguire) lives in Forest Hills, a quiet neighborhood in the New York City borough of Queens, with his Uncle Ben (Cliff Robertson) and Aunt May (Rosemary Harris). He secretly loves Mary Jane Watson (Kirsten Dunst), a warm-hearted girl next door, but he is too shy to approach her. His friend Harry Osborn (James Franco) is the son of Dr. Norman Osborn (Willem Dafoe), president of the Oscorp manufacturing corporation, which is working to win a contract to supply weapons to the United States Army. On a field trip to a genetics laboratory, Peter is bitten by a genetically engineered spider. He passes out in his bedroom at home, and the next day his vision is perfect, he has become more muscular with superhuman strength, his wrists emit web strings, and his reflexes are super-quick. At school, he saves Mary Jane from a split-second fall and easily defeats her bullying boyfriend in a fistfight. Realizing that the spider's bite has given him spiderlike powers, he trains himself to scale walls, jump between rooftops, and swing through the city.

A young high school student named Peter Parker has it in for himself. He is a nerd, has one good friend, is the target of bullying and can't seem to get his love interest, Mary Jane, attention. When one fateful field Peter gets bitten by a gentically altered spider, and the next day wakes up with amazing strength, agility, and a "spider sense." After his uncle is killed in a car jacking Peter gets revenge on his uncles death and vows to help society, coining up his alter ego Spider-Man winning the hearts of many girls and citizens of New York, but losing it to the law of the Big Apple, Spider-man encounters his first real test, The Green Goblin.

Other: Some course language, 2 really 'kissy' parts, lots of violence, nightmare provoking scenes, etc. Not really for kids under 9.