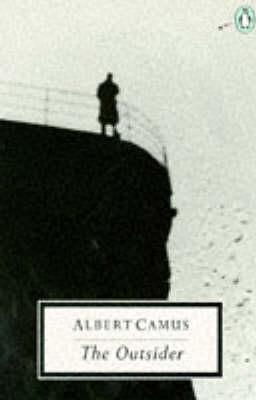 Meursault leads an unremarkable, bachelor life in Algiers. But his sudden involvement in a violent confrontation throws him into turmoil as he is forced to question the fundamental values of society. Camus creates a world without a God but a society that is still subject to restrictive, man-made rules capable of alienating any who transcend them. In this most memorable of existential novels, Camus pits the lone and courageous individual against the benign indifference of the universe. Meursault's deception perfectly reflects the absurdity of life.
Publisher: London : Hamilton, 1946.
Branch Call Number: FICTION
Characteristics: 126 p. ;,20 cm.

Well the new year is underway and it's another year of excellent reading ahead! But if you're struggling to get back into the rhythm of reading, or if the idea of a thick tome after weeks of recreation has you daunted, then I've got an idea for you; why not try a novella or two!? A novella is a mid-length story that fits somewhere between a short story and a full blown novel. Many great aut… (more)

The Outsider (sometimes known as 'The Stranger') is a thought provoking classic of justice, society, and individualism. Camus tells the story of Meursault, a young Frenchmen who must come to terms with his crime, with a matter-of-fact style that enhances the depth of its content.

‘The Outsider’, sometimes known as 'The Stranger', is a thought-provoking classic which covers themes of justice, society, and individualism. With a matter-of-fact style that enhances the depth of its mere 126 pages, this novella tells the story of Meursault, a young Frenchmen who must come to t... Read More »

Finished June 5 2021.
It was good overall - the writing is easy to understand and clean. The narrator is very detached and unemotional. I finished it in about 2 hours. The ending was confusing so I had to read up on analysis, also because I seemed to be missing the overall point. Overall point: life is absurd and doesn't make sense, protagonist rejects religion/higher order to the disgust of people around him, doesn't have a reason for killing the guy. Things happen for no rhyme or reason.

What is known as one of the great works of Albert Camus, The Stranger is one of the most profound philosophical novels in the last century. It details the life of Meursault, a young French man who lives a common life, although he himself is unorthodox in various ways. After the death of his mother, who he feels no attachment for, he runs into his former coworker Marie, who he immediately engages in a relationship. He also meets Raymond, a friend with questionable morals who he spends time with on a beach. Shockingly, he kills a man for little to no reason, which disrupts his entire life. He is soon revealed to the prospect of the individual vs. the society as he goes through a biased court trial, resulting in his tragic end. However, he feels no such remorse, actually welcoming his fate and reconciling his beliefs with what he perceives to be a meaningless universe.

The twist in the novel comes as a surprise, and makes you question whether or not the main character is a good, or even decent, person. Its emphasis on absurdism becomes heavily emphasized in the later parts of the novel, in which the audience can see Meursault’s slow transformation into an absurdist hero. Throughout the novel, we are taken aback by Meursault’s lack of self awareness in various instances, when he himself is so heavily focused on observing other people. I found the plot to be fairly engaging, but the characters and other various symbolism definitely outshined it. Camus makes masterful use of the heat and the sun as an important literary device, chronicling Meursault’s descent into the absurdist philosophy.

Like much of the other work of Camus, this novel deals with absurdism as its main philosophy. You do not necessarily have to agree with Camus and his take on the world to read this novel; however, if the philosophy does make you highly uncomfortable, I would not recommend reading this. Overall, I enjoyed the novel as a new take on the world from the perspective of an absurdist.

I don’t know about reckless alienation and spiritual exhaustion of the 1940s, nor about nihilism, absurdism or existentialism - but I find it very comforting to have described to me ‘the gentle indifference of the world.’
Life is for living. Dare to live.

The Stranger is a short novel that could be read in an afternoon. It is dull and is not very engaging or interesting to read. The main character, Monsieur Meursault, is seeking a life that limits connection with people. He is looking for mental and emotional isolation. He feels apathetic towards and is detached from society. A large portion of the book involves the main character commenting on and analyzing his surroundings, making the plot simple and boring. The climax was the only portion of the storyline that was entertaining to read. After the climax, I quickly lost interest in reading the book. The novel presents the idea of absurdity and also demonstrates the dark sides of human nature such as indifference and insensitivity toward relationships. I would only read this book again to study further into the underlying philosophical themes presented, not for the actual content of the book. I would recommend this book for teens and adults because it has some sensitive topics. 2/5 stars.
@CookieMonster of the Hamilton Public Library's Teen Review Board

The sun made me do it.
This statement makes Mersault, in his creator's own words, the only Jesus we deserve. Or, as Camus would say later, by writing "my mirror opposite (paraphrase)".
The most obvious explanation is perhaps the hardest to grasp. The reason the book must be experienced in all its scant, two-part detail. Taking Kafka's "Trial" into the boxing ring by way of Cain's style ("Postman Always Rings Twice").
Is he lethargic from a sun under which he was not born? A romantic about a people he never really understood?
The questions raise more questions. Which is why many men would agree with the verdict: greatest novel of 20th century. To be read with the play "Caligula" and "Myth of Sisyphus."

The Cure’s song “Killing an Arab” is based on The Stranger, so I read it...and I was disappointed. It’s far too anachronistic at this point. It did keep my interest, but let me down more than once. Perhaps, I should have retrieved the more popular translation, as suggested by many other reviewers.

Perhaps my favorite philosophical novel and certainly one of western philosophy's most important texts.

Originally published back in 1942 - "The Outsider" (aka. "The Stranger") was one of the very first novels written by French author, Albert Camus who was just 29 at the time.

This novel's overall theme and outlook has proven to be one of the best examples of demonstrating Camus' "philosophy of the absurd", which refers to the conflict between the human tendency to seek inherent value and meaning in life and the human inability to find any in a purposeless, meaningless, or chaotic and irrational universe.

"The Stranger" is widely considered to be a bona-fide classic of 20th century literature.

Originally published back in 1942 - "The Stranger" (aka. "The Outsider") was one of the very first novels written by French author, Albert Camus who was just 29 at the time.

This novel's overall theme and outlook has proven to be one of the best examples of demonstrating Camus' "philosophy of the absurd", which refers to the conflict between the human tendency to seek inherent value and meaning in life and the human inability to find any in a purposeless, meaningless, or chaotic and irrational universe.

"The Stranger" is widely considered to be a bona-fide classic of 20th century literature.

Throughout the whole absurd life I’d lived, a dark wind had been rising toward me… What did other people’s death’s or a mother’s love matter to me; what did his God or the lives people choose or the fate they think they elect matter to me…What would it matter if he were accused of murder and then executed because he didn’t cry at his mother’s funeral? Salamano’s dog was worth just as much as his wife.

As if that blind rage had washed me clean, rid me of hope; for the first time, in that night alive with signs and stars, I opened myself to the gentle indifference of the world.

"I would have liked to have tried explaining to him cordially, almost affectionately, that I had never been able to truly feel remorse for anything."

"Then he asked me if I wasn't interested in a change of life. I said that people never change their lives, that in any case one life was as good as another and that I wasn't dissatisfied with mine here at all."

"Mother died today. Or, maybe, yesterday; I can't be sure."

"As if that blind rage had washed me clean, rid me of hope; for the first time, in that night alive with signs and stars, I opened myself to the gentle indifference of the world. Finding it so much like myself — so like a brother, really — I felt that I had been happy and that I was happy again. For everything to be consummated, for me to feel less alone, I had only to wish that there be a large crowd of spectators the day of my execution and that they greet me with cries of hate."

Mother died today. Or maybe yesterday. I don't know. I had a telegram from the home: 'Mother passed away. Funeral tomorrow. Yours sincerely.' That doesn't mean anything. It may have been yesterday.

Bluebird1298 thinks this title is suitable for 14 years and over

kokosowe thinks this title is suitable for 13 years and over

This novel is also called "The Stranger", depending on who the translator is. It tells the story of a man named Meursault, who kills a man in cold blood shortly after his mother's death. This is an existentialist novel, and focuses on the absurd aspects of Meursault's life and trial.