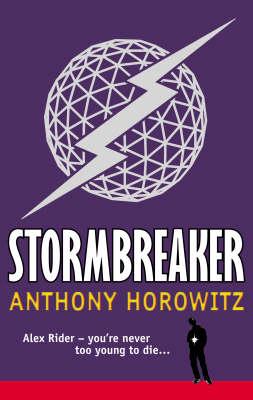 When his guardian dies in suspicious circumstances, 14 year old Alex Rider's world is turned upside down. Recruited into MI6 and armed with secret gadgets he sets off on his first mission, to discover the truth about the free gifts of Stormbreaker computers given to every school in the country.
Publisher: London : Walker, 2000.
Branch Call Number: YOUNG ADULT FICTION
Characteristics: 235 p. ;,20 cm.
Alternative Title: Storm breaker

What’s a young person to do this summer?!

The summer holidays are upon us at last and there's now lots of daytime hours to pursue your extracurricular interests and one of those interests is sure to be reading, but just WHAT do you read..?!? I have compiled a reading list just for you so you don't have to waste your precious summer moments searching for your new favourite book. There's everything in here, from steampunk adventure t… (more)

Alex Rider is a normal British schoolboy until his uncle dies in a car accident. Alex looks deeper and finds out it wasn’t an accident and that his uncle was a spy for MI-5. Alex suddenly finds himself in the middle of a top-secret operation where he must rely on his instincts to keep himself ali... Read More »

Book 1 of the Alex Rider series. Recommend the whole series.

When his guardian dies in suspicious circumstances, 14 year old Alex Rider's world is turned upside down. Recruited into MI6 and armed with secret gadgets he sets off on his first mission, to discover the truth about the free gifts of Stormbreaker computers given to every school in the country.

Action, suspense, and daring are at an extreme in Anthony Horowitz’s number one bestselling novel, Stormbreaker. Stormbreaker follows the adventures of the fourteen-year-old British teenager, Alex Rider, and his encounters with the British intelligence agency, MI6. Following the tragic death of his uncle, Ian Rider, and discovering his uncle didn’t die the way that was stated, Alex must find out more about his family, even if it means life or death.

Throughout the novel, Alex must fight against the odds to follow his family's legacy with MI6, while risking his life to complete his mission. Herod Sayle, an international businessman, has offered the schools of Britain an incredible gift, one of his new computers for every school in the country! But, MI6 is interested in his affairs and needs to ensure themselves that what he is doing is completely safe, and young Alex Rider is the perfect agent for the job.

In this scene, Alex is kidnapped by MI6, and forced to listen to what they have to say.
“ “As I’m sure you’ve gathered,” he said, “the Royal and General is not a bank. In fact, it doesn’t exist … it’s nothing more than a cover. And it follows, of course, that your uncle had nothing to do with banking. He worked for me. My name, as I told you at the funeral, is Blunt. I am the chief executive of the Special Operations Division of MI6. And your uncle was, for want of a better word, a spy.” Alex couldn’t help smiling. “You mean … like James Bond?” “Similar, although we don’t go in for numbers. Double 0 and all the rest of it. Your uncle was a field agent, highly trained and very courageous. He successfully completed assignments in Iran, Washington, Hong Kong, and Havana … to name but a few. I imagine this must come as a bit of a shock for you.” Alex thought about the dead man, what he had known of him. His privacy. His long absences abroad. And the times he had come home injured. A bandaged arm one time. A bruised face another. Little accidents, Alex had been told. But now it all made sense.”

Will Alex be recruited by MI6? Will he complete his daring mission? Will he ever learn more about his torn-apart family? Find out in Anthony Horowitz’s influential novel, Stormbreaker. - Camden

Stormbreaker, by Anthony Horowitz, is a British spy novel for young readers, and the story's protagonist is Alex Rider, the nephew of Ian Rider, who was killed for information that he obtained (since he's a spy for MI6). Now, Alex must find out what his uncle found out to stop whatever is coming. The book was boring for me at first, but then I started to get more into it, so I will most likely be reading the rest of the series.

This book is about teenage super spy Alex Rider going on his first ever mission. I like this book because the plot was really dramatic. Another reason I like this book is because there is so much suspense around the main character so it makes you want to read more to find out what else will happen. I also like the cover of the book because it is very detailed and is also very dramatic just like the plot of the book. I would recommend this book to people who like action and adventure. My age recommendation for this book would be for people aged 10 and over.

Got it for my teenage kid, ended up reading it myself. Great book and great series! Read the following 3 or 4 books as well, and the new tv series were fantastic!

The book Stormbreaker by Anthony Horowitz tells the tale of fourteen-year-old Alex Rider through his adventures. Up until the death of his uncle, who was also his guardian, Alex Rider was just like any other normal boy. However, he later found that wasn't the case at all. His uncle, Ian, was a spy for MI6, the intelligence agency for Britain, and had been training Alex to continue his work as a spy. Although Alex has some doubts, he is eventually coerced to continue his uncle's work for MI6. Alex faces his first test in trying to find the one responsible for his uncle's death, and he may unearth a bigger scheme in the process. Stormbreaker is an incredible novel by Anthony Horwitz and will keep you hooked until the end. The book is full of action, adventure, and humor that keeps you laughing. I would recommend this to anyone who is a lover of action and adventure.

This book is a one-of-a-kind adventure and the first in the Alex Rider series. Alex is a typical British fourteen-year-old boy who lives with his uncle Ian, a mysterious man who is often not around. When Ian dies, Alex discovers his uncle was actually a spy for MI6, the British intelligence agency, and that he was secretly training Alex his whole life to continue his work. Alex must put his skills to the test while searching for the person responsible for his uncle’s death and desperately trying to stop an even bigger scheme.

Stormbreaker is an incredibly intricate and detailed novel by Anthony Horowitz and one that will keep you entertained until the end. Horowitz takes the classic spy’s tale and makes it even better with the highly skilled but still naive Alex. This book is an action-packed ride of espionage, danger, and humor that never ends.

Book so-so. Not up to the author's usually excellent writing.

I really love the Alex Rider and Jason Steed series, with are great teen spy books, I hope they make more movies about them as well.

green_antelope_1078 thinks this title is suitable for 10 years and over

EobardThawne thinks this title is suitable for 10 years and over

emkuwata thinks this title is suitable for All Ages

AN3786 thinks this title is suitable for 11 years and over

Devaansh182 thinks this title is suitable for All Ages

Blue_Pig_77 thinks this title is suitable for 10 years and over

crazycoolbff thinks this title is suitable for 12 years and over

"'It's not my job to ask questions,' he had said. 'But if it was, I'd want to know what they're thinking of, sending me children. Do you have any idea where you are, boy? This isn't a holiday camp. This isn't even Disneyland.'" (pg. 49)

Killing is for grown-ups and you're still a child.

"There were two of them, both dressed in loose-fitting overalls. Alex had a feeling he'd seen them before".

“When the doorbell rings at three in the morning, it's never good news.”

After the death of his uncle, the 14-year-old schoolboy Alex Rider is forced by the Special Operations Division of Britain's secret intelligence service, MI6, for a mission which will save millions of lives.

This story is about a young boy named Alex, whose uncle dies mysteriously. He begins to investigate and unwillingly gets involved in MI6 and was recruited to be a spy to find out what really happened to his uncle and why he had to die.