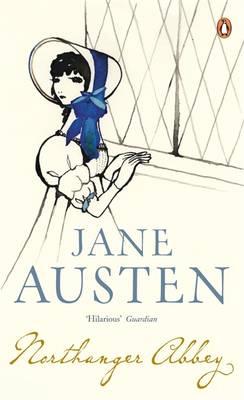 What at least feels like Austen's shortest novel, the more light-hearted Northanger Abbey is a self-astute reflection on overactive imaginations, female friendships, innocence, and the coming of age of a young woman in the Regency era. Although the romance is critical to the plot line, Catherine's love interest(s) feel more like a background to the development of her own character and self-confidence. Catherine's awkwardness and naivete are challenged and overcome through the introduction of some of society's ills. Catherine navigates unwanted suitors, untrustworthy friends, double meanings, and the confusion every young woman faces when she finds herself in love with a man who may or may not return her affections.
I enjoyed the way that Austen breaks the fourth wall in a subtle way. She pokes fun at the best and worst ramifications of being a novel-reader, and places her heroine in a storyline that denies every contemporary trope of romance novels. Lighter than most of Austen's works, Northanger Abbey is filled with subtle humor, warm characters, and a sensitive portrayal of a supposedly ordinary young woman.

Early on in Northanger Abbey, Austen turns metafictional and pens a stirring defense of the novel, criticizing those who look down on the form. She then proceeds to hilariously poke fun at the popular gothic novels of her day of course, which is all delicious. Her wonderful defense goes in part:

"Although our productions have afforded more extensive and unaffected pleasure than those of any other literary corporation in the world, no species of composition has been so much decried... there seems almost a general wish of decrying the capacity and undervaluing the labour of the novelist, and of slighting the performances which have only genius, wit, and taste to recommend them."

Of course, one can take the reading of novels too far, and that is what happens to the naive Catherine Moreland. "Catherine sometimes started at the boldness of her own surmises, and sometimes hoped or feared that she had gone too far; but they were supported by such appearances as made their dismissal impossible." Alas! Catherine misjudges; the world is not, in fact, like that of a gothic novel. At least not England, but who can say about the Continent?

Catherine Morland is a young girl on the verge of love and marriage. While vacationing with her extended family, she falls in love with the witty Henry Tilney and befriends Isabella Thorpe. As the three families mingle and its younger members form friendships and relationships, Catherine realizes that not everyone’s words align with their actions.

I’ve just been loving Austen recently! Both the narrator and our male love interest are witty. Although Austen frequently employs such narrators/characters, this is one of those instances when she pokes fun both subtly and explicitly and often gets me grinning.

The best thing about this work is its anti-Gothic-trope elements. Austen would set up these stereotypically Gothic scenes and ensure both Catherine and the reader are expectant of a Gothic outcome, only to have everything come crashing down and turn into a joke.

Although this book is now a “classic” to us, it would not be hard to imagine how this would have been part of the contemporary popular culture — the way it parodies the Gothic novel is just the way we now spin romance/horror/mystery genres on their heads.

I have been reading Austen since I was a teen, but have never loved any of her works (except the 2005 Pride and Prejudice movie adaptation) until Mansfield Park. But the fact that I liked this one too makes me think that maybe I’m finally approaching that age to understand “society” and “humanity,” so I have downloaded both Persuasion and Sense and Sensibility and will be listening to those next!

To see more reviews, visit me on Instagram @ RandomStuffIRead ！

Just finished the audiobook read by Flo Gibson ... it took me a while to get used to her voice but after a while I loved it because she was so good at being sarcastic - particularly with Henry Tilney. I adore this book. It's so funny, and has a sweet ending. I like all of Jane Austen's works but find this one the easiest to get through.

An excellent gothic satire....this book will have you laughing heartily

I read this book for class, I can see why Jane Austen is a popular writer however, I wasn't personally a fan. I really disliked the majority of the characters the main character included. I found them to be naïve or manipulative and over all I wouldn't read the book again.

I still love Austen and her satirical fiction, and this one reads a bit like a YA novel. Light and silly. Good choice if you want an easy Austen novel about a teenage girl navigating first loves and friendships.

Overall, an excellent regency romance story--typical of Ms. Austin. The ending chapters, however, felt rushed and contrived and left this reader with a feeling that it was underdeveloped. There were just too many unanswered questions. Not quite on par with Pride and Prejudice or Sense and Sensibility, but an enjoyable read, nonetheless.

Catharine Morland's over-active imagination spurred on from her love of gothic romance causes her no end to entertainment, delight, and misunderstandings. And, Mr. Tilney is (in my opinion) Austen's wittiest and most charming suitor - far superior to Mr. Darcy in every way! My favourite of Austen's novels!

It is official: Henry Tilney has joined, in my opinion, the great ranks of Jane Austen men side-by-side with Colonel Brandon, Captain Wentworth, Mr. Knightley and of course Mr. Darcy! Love this story!

"...I leave it to be settled by whomsoever it may concern, whether the tendency of this work be altogether to recommend parental tyranny, or reward filial disobedience" (Austen)

It is only a novel... or, in short, only some work in which the greatest powers of the mind are displayed, in which the most thorough knowledge of human nature, the happiest delineation of its varieties, the liveliest effusions of wit and humour, are conveyed to the world in the best-chosen language.

The company began to disperse when the dancing was over – enough to leave space for the remainder to walk about in some comfort; and now was the time for a heroine who had not yet played a very distinguished parts in the events of the evening, to be noticed and admired. Every five minutes, by removing some of the crowd, gave greater openings for her charms. She was now seen by many young men who could not see her before. Not one, however, started with rapturous wonder on beholding her, no whisper of eager inquiry ran round the room, nor was she once called a divinity by any body.

She was looked at however, and with some admiration; for, in her own hearing, two gentlemen pronounced her to be a pretty girl. Such words had their due effect; she immediately thought the evening pleasanter than she had found it - she went to her chair in good humour with every body, and perfectly satisfied with her share of public attention.

“The person, be it gentleman or lady, who has not pleasure in a good novel, must be intolerably stupid.”

"Friendship is certainly the finest balm for the pangs of disappointed love."

blue_dog_17792 thinks this title is suitable for 12 years and over

rabios thinks this title is suitable for 12 years and over

Dstar_4 thinks this title is suitable for 13 years and over

Jane Austen's first novel—published posthumously in 1818—tells the story of Catherine Morland and her dangerously sweet nature, innocence, and sometime self-delusion. Though Austen's fallible heroine is repeatedly drawn into scrapes while vacationing at Bath and during her subsequent visit to Northanger Abbey, Catherine eventually triumphs, blossoming into a discerning woman who learns truths about love, life, and the heady power of literature. The satirical novel pokes fun at the gothic novel while earnestly emphasizing caution to the female sex.