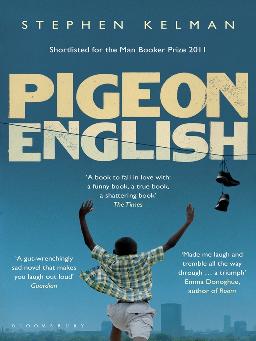 Newly arrived from Ghana with his mother and older sister, eleven-year-old Harrison Opoku lives on the ninth floor of a block of flats on an inner-city housing estate. The second best runner in the whole of Year 7, Harri races through his new life in his personalised trainers - the Adidas stripes drawn on with marker pen - blissfully unaware of the very real threat all around him. With equal fascination for the local gang - the Dell Farm Crew - and the pigeon who visits his balcony, Harri absorbs the many strange elements of his new life in England: watching, listening, and learning the tricks of urban survival. But when a boy is knifed to death on the high street and a police appeal for witnesses draws only silence, Harri decides to start a murder investigation of his own. In doing so, he unwittingly endangers the fragile web his mother has spun around her family to try and keep them safe. A story of innocence and experience, hope and harsh reality, Pigeon English is a spellbinding portrayal of a boy balancing on the edge of manhood and of the forces around him that try to shape the way he falls.
Publisher: London :, Bloomsbury Publishing,, 2011.
Characteristics: 1 online resource.
Additional Contributors: OverDrive, Inc

Notes: Downloadable eBook.
Not recommended for use on the libraries' public computers.
Shortlisted for the Man Booker Prize and the Guardian First Book Award, 2011.
Requires Adobe Digital Editions, OverDrive App, or similar.

How good was this book? It's written in slang and dialect, and I usually hate that. It worked here.

This story is told by an 11 year old boy from Ghana, living in a council estate (tower) in London with his mother and sister who tries to solve the killing of another young boy. There are also small parts told by a pigeon which do not work at all. The book is somewhat simplistic and childish, although the phenomenon of stabbings of children is real enough. However, Kelman is no Ross Raisin.

Doesn't really accomplish what it set out to do. Read this for the voice of the narrator, if you must. The ending is a real shocker & rather abrupt.

The child's voice is believable, the intrigue gets you hooked, but there are moments in the book that feel like they could have made it more award-worthy. Perhaps sometimes the pacing seems a little odd -- there is a much slower pace through most of the book that quickens really rapidly at the end, and it doesn't feel smooth. The pigeon also doesn't have a consistent voice throughout the book (perhaps that's intentional?), which made it sort of odd too. However, it was a compelling book with a whammo ending.

Great book! Unique and surprising characters; a look at a different way of coping with turmoil. Harri Opuku is my hero!

This is one of those novels with a clear voice, here the voice of Harri (Harrison) Opoku. Harri lives with his mom (a midwife) and his older sister Lydia on the 9th floor of an apartment building in London, England. Harri's dad, little sister and grandma are still back in Ghana and Harri wants desperately to see them again, as the phone calls aren't enough for him. Harri has made a friend, Dean, and the two boys spend a lot of time together. Another boy from Harri's school has been knifed and killed and Harri and Dean take it upon themselves to look for the killer since the police don't seem to be making headway. The two boys relish their role as detectives and take clues seriously, trying to gather fingerprints and other hard data.
Harri is also a bird lover, and takes a special liking to a particular pigeon, having secret conversations with it. He is also both fascinated and repelled by the local gang, the Dell Farm Crew, and is occasionally singled out by their leader X-Fire.
Harri is an innocent, trying to be the man of the house in his father's absence, and is a good boy at heart. Even his work to find the boy's killer is a good work, one he feels drawn to because the boy once did a nice thing for him. This is a story that will stick with you, young Harri's voice grabbing you and not letting go.

I like a book that plays with language. You might want to start by having a quick look through the glossary before reading. The narration by an 11-year-old was a bit aggravating to start, but I was feeling the love for him midway through. Love for him and all the vulnerable people and animals (yes, pigeons) trying to eek out a life in this world.
Booker shortlisted 2011

"Knife fights might seem like a quaint way to settle gang spats; they hark back to West Side Story more than The Wire. In Britain, however, knife violence is a seemingly ever-present threat. In 2008, there were a record 277 fatal stabbings. One older murder that still resonates in Britain is the case of Damilola Taylor, a 10-year-old immigrant from Nigeria who bled to death in the stairwell of his southeast London council estate after being stabbed by two 12-year-old boys. It’s against this backdrop of explosive juvenile bravado and working-class desperation that Stephen Kelman sets his debut novel, Pigeon English, a book both chilling and charming."

Stephen Kelman's debut novel Pigeon English introduces readers to one of the most pervasively and persuasively authentic narrator voices in fiction in recent memory. That recent memory includes the precocious Jack in Room by Emma Donoghue and the quietly unforgettable Christopher in The Curious Incident of the Dog in the Night-time by Mark Haddon ... which means that Kelman's 11-year-old Harrison Opoku (known as Harri to his family and friends) is in admirable and luminous company.

Harri has just arrived in London from Ghana with his mother and teenaged sister, and is living in a housing estate that would be euphemistically labelled a "priority" or "at risk" neighbourhood in some constituencies. Harri's family is asunder - his grandmother, father and infant sister remain behind in Ghana - and in some unspecified peril because of the terms by which some of them were able to come to England. Harri's natural and infectious ebullience seems more affected by long distance yearnings for the people left behind than stymied or threatened by the more immediate cacophony surrounding him at home, at school and on the streets. Even when a boy is stabbed to death in his neighbourhood, it fascinates Harri more than it truly bothers or affects him, as the sound of his baby sister's voice getting cut off on the phone clearly does.

Voices near and far are just one of an intricate interweaving of metaphors and imagery that Kelman handles with impressive assurance for a first-time novelist. Kelman controls well but not obtrusively not just his protagonist's voice, but the chorus of supporting characters' voices echoed and interpreted through the protagonist. Through his mastery of the subtleties of voice, accent and expression, Kelman also sensitively and precisely manages the perceptions that drive the story forward, and the misapprehensions and naivete that lead it understandably astray.

Kelman incorporates other types of potent imagery and weaves them organically and comfortably into Harri's words and observations, without undermining the believability of Harri's voice, but also of the gritty realities he faces navigating amongst schoolmates, gangs, shopkeepers, police officers and others in his inner-city world. References to fingerprints and fingertips are especially intriguing - how they are used to identify or when erased, to hide one's identity - but also how they are used to gather information and experience the textures and sensations of the world. Much of the imagery builds on the feelings of a child hungry to learn, to grow, to love and be loved.

The only false note in Pigeon English is the intermittent introduction of a second narrative voice that can't possibly match the authenticity and vivacity of Harri's voice. This second voice neither expands the view of the story credibly beyond Harri's perceptions and assessments, nor does it work well metaphorically as other imagery does. As well, the pigeon/pidgin pun is not only forced, but is ever-so-slightly offensive, and seems to strangely demean the book's greatest achievement: its convincing voices in all of their linguistic originality and complexity. A pidgin language is defined as a simplified language that develops as a means of communication between two or more groups that do not have a language in common. Harri's voice and vocabulary form a surprisingly sophisticated argot and amalgam of everything from Ghanaian, English and Ghanaian-English slang to commercial and technological terminology to his own sweet and singular usages and classifications of the world. It's unforgettable and not to be diminished as something lesser or compromised.

When the book ends and Harri's voice is stilled, this reader immediately, achingly, acutely missed him - true testament to the strength of an indelibly forged voice. Asweh, you won't want to let go of young, vibrant Harri either.

I don't have a favourite raindrop, they're all as good as each other. They're all the best. That's what I think anyway. I always look up at the sky when it's raining. It feels brutal. It's a bit hutious because the rain's so big and fast and you think it will go in your eye. But you have to keep your eyes open or you won't get the feeling. I try to follow one raindrop all the way down from the cloud to the ground. Asweh, it's impossible. All you can see is the rain. You can't follow just one raindrop, it's too busy and all the other raindrops get in the way.

There are no age suitabilities for this title yet.

There are no summaries for this title yet.