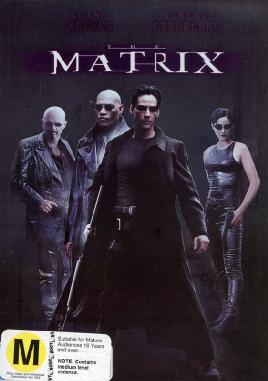 American science fiction writer Ted Chiang has a very particular way of speaking. He pauses a lot to gather his thoughts, and the intonation, or melody, of his voice doesn't vary much. This can have the effect of making it feel that he is taking a very long time to get to the point. Fortunately, Arrival is the third WORD Christchurch session of his that I'm attending so I've become somewhat… (more)

I love this movie. A great mind over matter plot. And nice effects.

The Matrix is a 1999 science fiction film written and directed by the Wachowski's. The Matrix is the first installment in the Matrix trilogy.

The Matrix describes a simulated reality where machines control mankind and humans are used as batteries. The Matrix stars Keanu Reeves as Neo who discovers the truth about the matrix and joins forces with others who have discovered the truth and are awakened. Trinity (played by Carrie-Ann Moss), Morpheus (played by Laurence Fishburne) and Agent Smith (played by Hugo Weaving|) round out the cast.

Neo is a computer hacker and one day he meets Morpheus who gives Neo an option to take a pill. If he chooses the red pill he will learn the truth about what the Matrix is or if he chooses the blue pill he will forget the meeting and return to his artificial life. Neo chooses the red pill and wakes up aboard Morpheus ship the Nebuchadnezzer and is now disconnected from the Matrix. Morpheus works training Neo since he is following prophecy and is looking for 'the one'. To do this Neo and Morpheus contact the Oracle (played by Gloria Foster) as Morpheus wants to know if the Oracle believes Neo is 'The One' that will save Zion and free the rest of humanity.

Neo is mercilessly pursued by Agent Smith throughout the movie. When Agent Smith captures Morpheus he is tortured in order that the Agent can get the access codes to the Zion computer systems. While Trinity and Neo are trying to rescue Morpheus, Neo is surprise attacked by Agent Smith. Will Neo survive ? Who will save him ? No spoilers, but has a very nice ending.

The special effects in the fight scenes are amazing. The Matrix introduced a technique called bullet time where character action happens in slow motion while the point of view from the camera is normal speed.

The original Matrix does not disappoint. The special effects are fantastic. This film grossed $463.5 million dollars worldwide and it won four Academy awards.

This movie was rated R at the time of its release but today fits under PG-13. So if you are under the age of 13 you will need to watch this movie with parental guidance. Warning this film contains violent fight scenes, there is some swearing but no nudity.

This was a great action movie. Had to do some thinking on what was actually taking place but enjoyed. As technology has improved over the years when young people see all the cords and mechnicams that keep the operating systems working they will wonder what is going on.
We plan on watching the next 2 movies.

Excellent science fiction that has aged well. You have to pay attention to every single minute or you'll miss something important. Watched it for Halloween (with the 2 sequels, which were horrendously bad).

Now I understand when people say they feel like they are in Matrix!

The excellent sci-fi classic still holds up. Fantastic action and story with much to read into.

Saw it on VHS, I think. Or DVD. Can't remember. Blew me away. I was a kid. I think it was a watershed film, now. But I think it misses the boat. Most people aren't like The One, Dude. They want the matrix.

Even though this is 20-years-old, it still holds up. This will always be one of my sci-fi favs!

"Fight Club" is the traditional movie of choice for pathetic losers with overinflated notions of their own masculinity and value to anyone (especially women), but "The Matrix" is an acceptable substitute.

This is a great Hollywood movie, stand alone. The sequels are awful so cherish this premiere. The red/blue pill scene is a classic and mind-bending when seen the first time. Reeves is just right for the role of The One. Fishburne and Weaving are excellent in their roles. I find the soundtrack overbearing at times but that's to be expected in a "action" movie. Worth repeated watching's. This DVD has many extra features some of which are quite interesting. A classic! P.S. Curious footnote....the Wachoski brothers are now sisters!

Deja vu is usually a glitch in the matrix. It happens when they change something.

Throughout human history, we have been dependent on machines to survive. Fate, it seems, is not without a sense of irony.

I hate this place, this zoo, this prison, this reality, whatever you want to call it. I can't stand it any longer. It's the smell, if there is such a thing. I feel saturated by it. I can taste your stink, and every time I do I fear that I have somehow been infected by it. It's repulsive!

What you know you can't explain, but you feel it. You've felt it your entire life, that there's something wrong with the world. You don't know what it is, but it's there, like a splinter in your mind, driving you mad.

Morpheus: This is your last chance. After this, there is no turning back. You take the blue pill - the story ends, you wake up in your bed and believe whatever you want to believe. You take the red pill - you stay in Wonderland and I show you how deep the rabbit-hole goes.

Agent Smith (to Morpheus): "Humans are the disease, and WE are the cure."

"You take the red pill, the story ends, you wake up in your bed and believe, whatever you like. You take the blue pill -- you stay in wonderland and I show you how deep the rabbit hole goes."

He's not going to make it.

ArapahoeTina thinks this title is suitable for 14 years and over

schmegu_at_hcplc thinks this title is suitable for 13 years and over

7Liberty7 thinks this title is suitable for 15 years and over

Ciresica thinks this title is suitable for 14 years and over

iwasthewalrus thinks this title is suitable for 14 years and over

lucky thinks this title is suitable for 14 years and over

jabey thinks this title is suitable for 12 years and over

Calgovin thinks this title is suitable for 13 years and over

It's not the Wachovski brothers'. The African American lady who created Matrix and the Terminator last year won billions in court for copyright infringement and theft of royalties.

Robots have taken control over the human race, and now it is up to those left to take a stand and reclaim control.