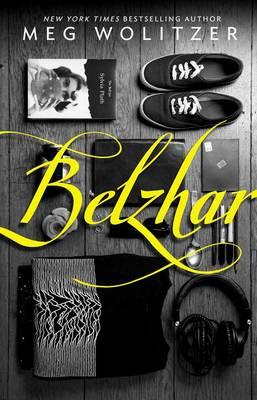 Jam Gallahue, fifteen, unable to cope with the loss of her boyfriend Reeve, is sent to a therapeutic boarding school in Vermont, where a journal-writing assignment for an exclusive, mysterious English class transports her to the magical realm of Belzhar, where she and Reeve can be together.
Publisher: New York :, Dutton Books for Young Readers, an imprint of Penguin Group (USA) LLC,, [2014]
©2014

I was sent here because of a boy. His name was Reeve Maxfield, and I loved him and then he died, and almost a year passed and no one knew what to do with me. A group of emotionally fragile, highly intelligent teenagers gather at a therapeutic boarding school where they are mysteriously picked for... Read More »

I personally thought this book was beautifully written and a wonderful way to explore grief and what it means to experience it and to know what it means to really heal. In this story, several teens, from extremely varied backgrounds all end of at The Wooden Barn, a therapeutic boarding school, in rural Vermont. Things aren't always as they seem. Each teen has experienced their own personal struggle and each comes to undertand their own version of closure through a magical force. It has a great surprise ending, and is a beautiful, emotional ride. Wolitzer was also inspired by Sylvia Plath's truthfully told story of her own illness in "The Bell Jar", so this is where the nod to the title came from in her own story, "Belzhar".

YA novel from the author of "The Interestings" and "The Female Persuasion."

Meh. An okay book. I really didn't like the main character; or any of the secondary characters, tbh. There were just too many, and they kind of melded together in my mind after a while. Won't be looking for any of this author's other books.

This plot-driven story intrigued me and kept me tense for long periods of time while reading it, which I appreciate. The Wooden Barn school was a bit over-the-top crunchy granola-like, but I'm glad there was nothing sinister brewing among the faculty or older students (kind of a tired theme). The main characters are well developed, except for Mrs. Q and Reeve. Peripheral characters are kind of shallow (Dana, DJ, Leo)but they do still add to the story. I see Wolitzer's point about how each person's trauma is his or her own, without comparing it with anyone else's; however, I've got to say I was kind of disappointed in the turn of events regarding Jam toward the end of this book. I'm guessing I should brush up on my Plath to relate to Jam's depth of emotional experience. The serious topics the author touches on are treated respectfully and I think well done from a teen's perspective.

A very interesting premise for a book - something a bit different from the "odd teens get sent to a special school" genre - especially in the connections with known literary works. The tension builds well and we start to care about the characters. Unfortunately, I found the resolution to be underwhelming.

I really enjoyed this book-I'm surprised by the mixed reviews. I think it's simpler than people want for a teen novel, maybe. A good read for teens going through something and want to see their sorrow reflected in a novel.

My feelings about this book are conflicted and I'm not quite sure what to say, so as a review I think I'll process those feelings a bit. I'm going to write in vague, general terms about my experience, but even that will give hints to things in the book that are meant to be surprising and so might be a bit spoilerish. Be warned before reading further.

A brief overview: Jam is being sent to a special boarding school for "emotionally fragile, highly intelligent" teens, since she hasn't been able to get over the trauma of the death of her first boyfriend, whom she loved intensely. At the school, she bonds with four peers in a special class where they read Sylvia Plath and write in journals that magically transport them to their last happy moments before their traumatic experiences, and they help each other begin to process and move on.

There are many things I enjoyed about the book. The story is well told, the teens seemed authentic, the gradual process of finding connection with others, coming out of isolation, and healing was honest and believable, and the theme of words being incredibly impactful is one I strongly believe. At times I felt the proceedings bordered on boring, but overall I liked much of the book.

But--and here's where I'm conflicted--the big reveal didn't work for me at all. I know mental illness is a highly personal experience that is hard for others to understand so I believe in being accepting and nonjudgmental, which makes me feel bad for what I'm about to say, as it goes against that belief. Nevertheless, it was my emotional experience with the book.

So. I knew there was going to be a reveal, since for most of the book Jam never shares the details of her trauma. And I strongly suspected the reveal would be a surprising twist, since there were hints she wasn't being completely honest--as a character or narrator. I even guessed at what the surprise might be fairly early, but then backed away from that theory based on her actions and descriptions the rest of the book. It turned out I should have trusted my gut. The problem is that, once Jam was finally forthcoming and honest, I found myself completely lacking in empathy or sympathy for her. I should have had it, but I didn't, and I couldn't stop myself from judging her negatively in response; I was unable to uncritically accept her the way the other characters in the book did.

I think--and here's where I fault the writing and not just my reading--much of my reaction had to do with the fact that Jam never shared her story until right at the end, so I was never allowed to feel what she was feeling. I was told what she was feeling, that she loved intensely and lost tragically, but I was never shown it in a way that made me feel it, too. I wasn't drawn into her experience of love and loss, and so my reaction to her full reality was intellectual instead of emotional. I wanted to feel for her, but I couldn't. And that, ultimately, spoiled the book for me and leaves me having a hard time writing positively about it.

That's where I am right now, anyway. I know many others haven't had the same issues I have, so maybe after talking with some of them and reflecting I'll feel differently. For now, though, I can only bring myself to give this three stars.

Wolitzer's first teen novel captures the painful, powerful emotions of adolescence and throws in a dash of fantasy. Some troubled teens are sent to a special school called a Wooden Barn, where their English teacher assigns them to read Sylvia Plath's The Bell Jar and to write in their own journals. The journals transport them back to the time of their major traumas and they learn to work past their problems. It's not as dark as it sounds, ending on a hopeful note about transformation. Wolitzer digs into the interior of her characters and pulls the reader into their world.

cjung1111 thinks this title is suitable for 11 years and over

There are no summaries for this title yet.

There are no quotes for this title yet.