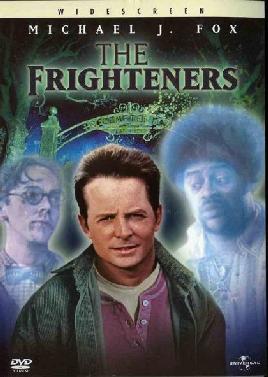 Con man Frank Bannister has a unique scam-- he works with a group of ghosts who haunt a home unitl Frank comes along to drive them out, for the right price. But the small town of Fairwater is plagued by a serial killer's evil spirit and Frank and his spiritual cronies face the challenge of getting rid of the ghost before the police decide to get rid of Frank.
Publisher: [Australia] : Universal Home Video, c1996.
Branch Call Number: FILM
Characteristics: 1 DVD (105 min.) :,sound, colour ;,12 cm. Region 4
Additional Contributors: Fox, Michael J. 1961-
Alvarado, Trini 1967-
Dobson, Peter 1964-
Astin, John 1930-
Stone, Dee Wallace 1948-
Combs, Jeffrey 1954-
Busey, Jake 1971-
McBride, Chi 1961-
Jackson, Peter 1961-

Michael J. Fox and Peter Jackson on the set of The Frighteners in London St, Lyttelton, Christchurch. The Lyttelton Post Office (now part of Lyttelton Library and Customer Services) is seen in the background, but was turned into Bistro Sundown for the movie. Also pictured, standing next to Jackson is Kiwi cinematographer, Alun Bollinger. May, 1995. Do you have any photographs of… (more)

Michael J. Fox and Peter Jackson on the set of The Frighteners in London St, Lyttelton, Christchurch. The Lyttelton Post Office (now part of Lyttelton Library and Customer Services) is seen in the background, but was turned into Bistro Sundown for the movie. Also pictured, standing next to Jackson is Kiwi cinematographer, Alun Bollinger. May, 1995. Do you have any photographs of… (more)

👻 Peter "LOTR" Jackson followed some of his early hits with an underappreciated screwball ghost suspense thriller, with Michael J. Fox as an end-of-his-tether ghostbuster who brings his own ghosts along, just in case you haven't got any of your own. He gets in trouble with a ghost who's bumping off the citizens of his seaside town. Fine special effects on top of special effects, a funny script, no slack moments, and Jeffrey "Re-Animator" Combs is a standout as a psycho FBI agent. Plus, Jake Busey channels his old man, and R. Lee Ermey shows you can't get away from your drill instructor, even after he's dead. Recommended by the American Mothers' Horror Appreciation Society.

The Frighteners is that rarest of things: A horror comedy that actually works. It's not a perfect film, but it balances mystery, horror, and comedy very well, thanks in large part to the lovable Michael J. Fox and also to the skillful direction of Peter Jackson. The special effects aren't quite as special a quarter-century later, but the story is so good that they're easy to look beyond.

Still an interesting film of Peter Jackson's pre LoTR era. The story is basic, yet Jackson finds a way to make it interesting by certain casting choices. There's some silliness and wholesomeness to this oddball horror.

Such a fun movie! Good plot and acting, definitely worth a watch :)

LOVED IT! Wish I'd seen it years ago. Don't know how I missed it. It's right up there with other wonderful Michael J Fox movies.

This is definitely an underrated movie. It has a great cast, good acting, and an interesting storyline. I would recommend this to fans of more comedic type horror movies.

Just had to see this one again. It's been a while. Not since VHS have I last seen it. It still moves me. And Trini is still so cute. Ohhh, that hair !!!!

Cyrus: You know if I wanted to get shot at everyday, I'd move my black ass to Los Angeles!

Judge: Give it up, Frank! Death ain't no way to make a living!

Judge: When a man's jawbone drops off it's time to reassess the situation.

bdls206 thinks this title is suitable for 17 years and over

After a car accident in which his wife, Debra, was killed and he was injured, Frank Bannister develops psychic abilities allowing him to see, hear, and communicate with ghosts. After losing his wife, he then gave up his job as an architect, letting his unfinished "dream house" sit incomplete for years, and put these skills to use by befriending a few ghosts and getting them to haunt houses in the area to drum up work for his ghostbusting business; Then Frank proceeds to "exorcise" the houses for a fee. But when he discovers that an entity resembling the Grim Reaper is killing people, marking numbers on their forehead beforehand, Frank tries to help the people whom the Reaper is after!