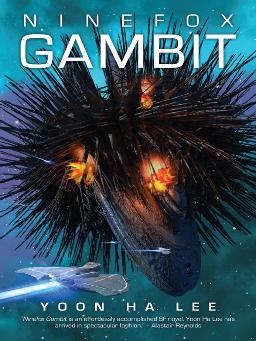 When Captain Kel Cheris of the hexarchate is disgraced for her unconventional tactics, Kel Command gives her a chance to redeem herself, by retaking the Fortress of Scattered Needles from the heretics. Cheris's career isn't the only thing at stake: if the fortress falls, the hexarchate itself might be next. Cheris's best hope is to ally with the undead tactician Shuos Jedao. The good news is that Jedao has never lost a battle, and he may be the only one who can figure out how to successfully besiege the fortress. The bad news is that Jedao went mad in his first life and massacred two armies, one of them his own. As the siege wears on, Cheris must decide how far she can trust Jedao?because she might be his next victim.
Publisher: Oxford :, Rebellion Publishing Ltd,, 2016.
Characteristics: 1 online resource.
Additional Contributors: OverDrive, Inc

Notes: Downloadable eBook.
Not recommended for use on the libraries' public computers.
Requires Adobe Digital Editions, OverDrive App, or similar.

Action packed space opera. Follow disgraced commander Kel Cheris as she gets the opportunity to redeem herself by commanding a mission to retake a star fortress from the heretics who have taken it. In a thrilling action orientated space opera, Cheris must decide whether an ally who could turn the... Read More »

Alina's pick: Not for the faint-hearted, this is an incredibly dense scifi story about a disgraced captain who has to work with a mass-murdering (but tactical genius) undead general to save the Fortress of Scattered Needles.

This one was hard to read but, oh my, was it worth it! This is out-there hard sci-fi with concepts that are really hard to wrap your head around. Enjoy this strange trip through a totalitarian galactic empire working hard to suppress the stirrings of democratic revolution.

Holy BANANAS this sci-fi is hard as @*$# & has 0 mercy, I love it. If the 1st chapter doesn't drown you, you'll be able to embrace the brilliance of this series opener. I knew this book had me when I took a nap and began to dream that I was experiencing the effects of calendrical rot...

This book keeps you guessing, & I'm willing to bet we'll be guessing until the very last page of this series! Respect this mad genius.

In science fiction or fantasy, we are introduced to lifeforms, concepts, cultures, futuristic weapons and warfare that is unlike anything we have experienced in our own realities here on Earth. For us to become engrossed in such tales, the authors of this kind of fiction must take the time to describe these new and unknown concepts, intelligent life forms and societies. This author does not do that, or at least, not well enough for me to become engrossed in this story. Calendrical heresy? Formation instinct? Kel, Shuos, Rahal, Nirai? Bannermoths, boxmoths, cindermoths? Words that name concepts, societal groupings, war vessels, but no pictures are adequately painted to help us visualize the main ingredients of this story. Though I was able to follow the general story-line, I was too confused by everything else to really care what happened to Cheris, the central character of this tale. I cannot recommend it.

Ninefox Gambit is highly conceptual science fiction that starts slow but builds to an interesting and worthwhile conclusion that is open to a sequel. While it will be a hard sell for those who don’t love military sci-fi specifically, it is the kind of richly layered story that will repay repeat visits. I didn’t love every minute of reading it, but Ninefox Gambit has continued to grow on me in retrospect.

This book drops you right into a far-future war, but if you're able to go with it, the story becomes its own reward. Taking you along on a battle for the very soul of humanity, the lush writing and creative world building combine in an ever-faster paced story that pays off at the very end when the importance of the title becomes apparent.

A good read. An interesting view on how the universe operates.

KickyMcGee thinks this title is suitable for 12 years and over

peter_leitch thinks this title is suitable for All Ages

The Fortress of Scattered Needles—a key strategic holding of the Hexarchate Empire—has been overtaken by heretics from within, an event which threatens to spread calendrical rot across the galaxy. Thanks to its shields of invariant ice, recapturing the Fortress by siege is virtually impossible, and the only man who could do it, General Shuos Jedao, has been dead for three hundred years. Fortunately, he has been preserved as an undead weapon which can be extracted from the black cradle when duty calls. Captain Kel Cheris—a mathematical prodigy who inexplicably chose the military Kel faction over the more academically minded Nirai—is selected to be the person to wield this “weapon,” and lead the campaign to reclaim the Fortress of Scattered Needles. Unfortunately for Cheris, Shuos Jedao slaughtered his own army before his death, which means that the Hexarchate’s secret weapon is mad traitor who cannot be trusted, even when his help is desperately needed.

The problem with authority is that if you leave it lying around, others will take it away from you. You have to act like a general or people won’t respect you as one.